Bus Shelter: A covered Structure at a bus stop providing protection against the weather for people waiting for a bus.
A human shelter is a structure or a natural feature that provides protection against bad weather, danger or inspect pests. The first shelter made by human being were made of animal hides, stones, straw, vines or wood.
Now these days we construct our shelters from a wide variety of materials such as wood and brick, steel and concrete, aluminium glass, plastic. The type of shelters people depend mainly on the climate, the material that are available and their intended use.
Houses are the most common shelter for people, but there are many other different kinds. Others include bus shelters, bomb shelters, band shells and tree houses. Portable shelters include tents, trailers, house boats, motor yachts and even motor homes. Other shelters like barns and sheds are built to cover and protect things besides people.
Animals live in a variety of different kinds of shelters from holes in the ground to caves, to nests and trees.

Igloo: This is a snow house. Seen in arctic regions. It is a traditional shelters.

Caves: Primitive men and animals lived in caves or caverns. These are seen both on mountains and along seasides.

Huts: These are small crude shelters. Mostly made of natural and locally available materials. Now a days we can see such huts on remote tribal areas only.

Tree houses: These are seen in forests for protection from animals. It made among the branches of mature trees.

House boats: These are modified boats for human dwelling. It’s either moored or motorized in Kerala, house boats used for leisure trips are locally called Kettuvallams.

(Hydrogen oxide) page no 7
Molecular Mass: 18 u
Structure of water

About 70% of our body weight is water.
Pure water has a neutral pH of 7, which is neither acidic nor basic.
70-75% of the earth surface is covered with water.
A healthy person can drink about three gallons (48 cups) of water per day.
Water vapours enters the air or atmosphere through the two main processes i.e., Evaporation and transpiration.
Water is essential for the survival and growth of plants and animals.
Uses of Water

Water for living organisms: Water is essential for every living being. It plays an important role in a large number of life processes. Water is a good solvent. The nutrients and salt present in our food get dissolved in water so that our body is able to absorb them easily.
It dissolves the waste materials of the body, which are expelled as urine.
Water regulates the temperature of our body for the process of sweating.
Water helps in the germination of seeds and growth of plants.
Water helps in preparation of good by plants in the process of photosynthesis.

Water dissolve the nutrients in the soil that can be easily absorbed by the roots of plants. It also act as a medium for the transport of minerals and other nutrients from one part of the plant to another.
Sources of Water
1. Surface Water: Surface water is present on the surface of the earth.

2. Underground Water or Subsoil Water: Some of the rain water that falls on earth seeps through the soil and goes down under the surface of the earth.
This reservoir of water collected over the hard non-porous rock below the surface of the earth is called ground water or underground water. The level of ground water is called water table. Groundwater is pumped out by digging wells deep till it reaches the water table. 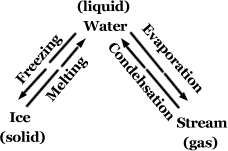 Transpiration: Plants also need water to grow. They take this water from the soil through their roots. The excess water is released by plants into the air as water vapour through stomata. This process is called transpiration.

: It was discovered by Urey, who showed that ordinary water contains one part of heavy water in 600 parts of it. It is used as tracer compound and as moderator in nuclear reactors.

Travel is movement of people between relatively distant geographical locations for any purpose and any duration, with or without any means of transport. Travel also includes relatively short stays between successive movements.
Purpose of travel includes recreation or tourism research for the gathering of information, for holiday to visit people, volunteer travel for charity or migration to begin life somewhere else.
Motives of travel include relaxation, discovery and exploration, interpersonal relationship and getting to know other cultures.
Travel may be local, regional, national (domestic) or internation.
Travel may occur by human-powered transport such as public transport, automobiles, trains and airplanes.

India has one of the largest road networks in the world [3..32 million km].

Roads are classified into six classes according to their importance:

Roads density: The length of road per 100 sq. km. of area is known as density of road.