Lawrence Kohlberg was an American developmental psychologist born in 1927 whose primary focus was on how children develop a sense of morality. The theories of Kohlberg are based on those of Piaget, although their theories and approaches differ as well.
Kohlberg focused his attention on the development of moral judgement in children. He treated the child as a moral philosopher. Kohlberg investigated how children and adults reason about rules that govern their behaviour in certain situations. He secured their responses to a series of structured situations or moral dilemmas.

Kohlberg’s Stages of Moral Growth : The three stages are as under –

Lev Semyonovich Vygotsky was a psychologist born in Russia in 1896. Vygotsky was most famous for his theory of socio-cultural development and believed 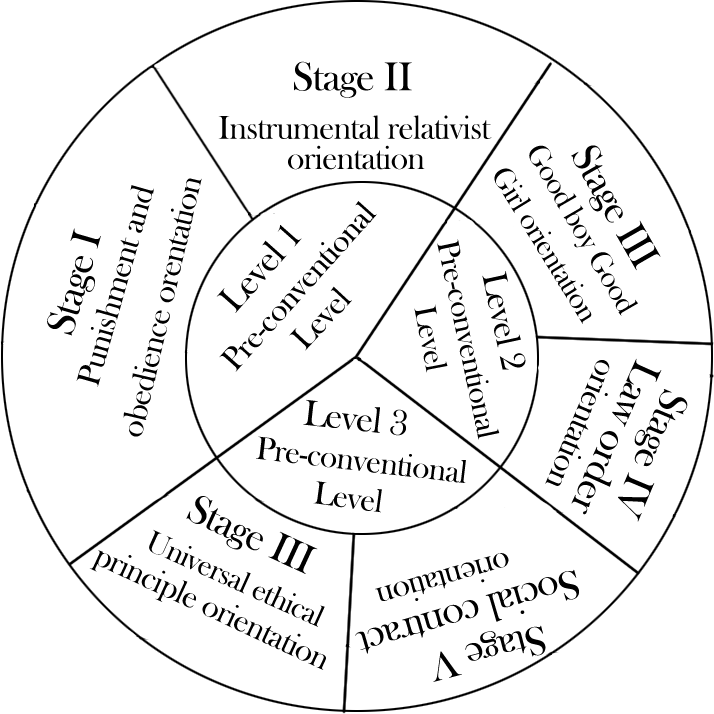 That development occurs primarily through interaction with one’s culture. Both theorists offered major contributions to the areas of developmental psychology as it applies to education. Culture is the prime determinant of cognitive development. Learning leads to cognitive development.
The Social Formation of Mind
Vygotsky believed that individual development could not be understood without reference to the social and cultural context within which such development is embedded.

Mind Evolution is Continuous: Unlike Piaget or Brunce, Vygotsky focused on the mechanism of the development, excluding distinguishable development stages.

Vygotsky’s Theoretical Assumptions: He rejected the idea that a single abstract principle, such as equilibration, can explain cognitive development. He offered an alternative to Piaget’s constructionism.

Mediation: Mediation means human beings purposefully interpose tools between them and their environment, in order to modify it and obtain certain benefits.

Examples – Farmers plough the earth to acquire better crops.
Mediation is a central concept in Vygotsky’s view of cognitive development. It offers a complementary perspective to the behaviourist view. He states that by using activity mediators, the human being is able to modify the environment, and this is her way of interacting with the nature. Two phenomena marked the mediated relationship of humans with their environment.
The use of tools within social organized activity. The use of language as a cultural form of mediation.

How people convert social relations into Psychological function?
They use different types of language (signs) as mediators between their minds and their environment.

High Mental Orocesses-Symbolic Mediation: When a child tries to grasp an object, and parents interpret this gesture as a pointing out to the object, they give her the object. She internalizes the gesture as a way of acquiring the mental representation of this behaviour becomes more abstract. An interpersonal relation between child and parents become intrapersonal (child’s representation of acquiring objects).

Decontextualization: The use of abstract language is the most important sign-mediated behaviour that occurs during cognitive development. It appears as the detachment from the individual features of the environment. An example is when children start to play with abstract objects.

ZDP is based on the mental functions that have not yet matured but are being in the process of maturation :

COMPARISON OF PIAGET AND VYGOTSKY

COMPARISON OF PIAGET AND KOHLBERG