1) A line contains infinite points
2) Infinite lines can pass through a point
3) Two distinct lines in a plane can’t have more than one point common.

In the above figure –

these angles are called alternate angles.

these angles are called corresponding angles. 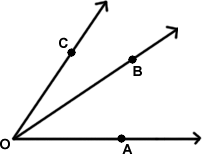 Side-Side-side: If all three sides of one triangle are equal to the corresponding sides of another triangle then the two triangles are congruent.

1) Opposite sides are equal.
2) Opposite angles are equal.
3) Each diagonal divides the parallelogram into two congreuent triangles.
4) Sum of any two adjacent angels is

.
5) Diagonals bisect each other.

The angle in a semicircle is a right angle. The converse of the above is also true and is very useful in number of cases.