According to Drever (1964), emotion involves bodily changes of a widespread character-in-breathing, pulse, gland secretion, etc. – and, on the mental side, a state of excitement or perturbation, marked by a strong feeling. The following are the components of emotion:

Emotions are transitory states, characterized by six features. First, emotions are neither overt behaviors nor specific thoughts; they are experiences. As a result, emotions are often mixed and even contradictory; assigning specific labels to them may be difficult. Second, emotional experience has valence, which means it her positive or negative, something you would like either to enhance or eliminate. Most people tend to act in ways that bring about happiness, satisfaction, and other positive emotions and to avoid doing things that cause pain, anxiety, disgust, or sadness.

Third, emotions are passions, not actions. Eating, for example, is an action, but hunger is a passion. Actions are initiated by the actor, whereas passions happen to the actor. The passionate nature of emotions does not mean that you have no control over them, however, because of their fourth feature: emotions arise in part from a cognitive appraisal of a situation. Emotions depend not just on situations but on what you think about those situations, such as how you interpret their potential for threat or pleasure. Emotions reveal the individual as both agent and object, as both I and me, both the controller of thoughts and the recipient of passions.
Fifth, emotions are accompanied by bodily responses. The facial and bodily movements that accompany emotions are partly reflexive and partly learned. Finally, emotions vary in intensity, from the quiet satisfaction of a person watching a beautiful sunset to the raging fury of a wrong lover. The importance of this feature of emotion is evident in people whose emotional intensity is very low. Nothing seems to get them excited; they appear to take no real pleasure in anything. An emotion is a valenced experience that is felt with some intensity as happening to the self, generated in part by a cognitive appraisal of the situation, and accompanied by both learned and reflexive physical responses.

How Do Human Emotions Develop?

In considering the development of emotions in human beings. We want to know, first of all, whether children have the same complexity, the same richness of emotional experience and expression as adults. Second, we are interested in how emotions change throughout life.

Do we learn how to express our emotions? Observations – of blind people also tell us something about the possibly unlearned nature of emotional expression (see Figure P 105). The facial expression of emotions by people who have been blind from birth is extreme and unmistakable. In comparison; people who had vision for the first years of their lives but later became blind tend to express their emotions in milder and more ambiguous forms, like the rest of us. It may well be that what we learn about the expression of emotions is: Don’t! It seems that we gradually learn to hide our emotions or to overly the natural expression with the specific pattern dictated by our culture.
We might conclude from all times that there are both learned and unlearned aspects of emotional expression. And when it comes to judging the emotions of others, it would seem that, to some extent at least, it does matter who is expressing the emotion and who is doing the judging. 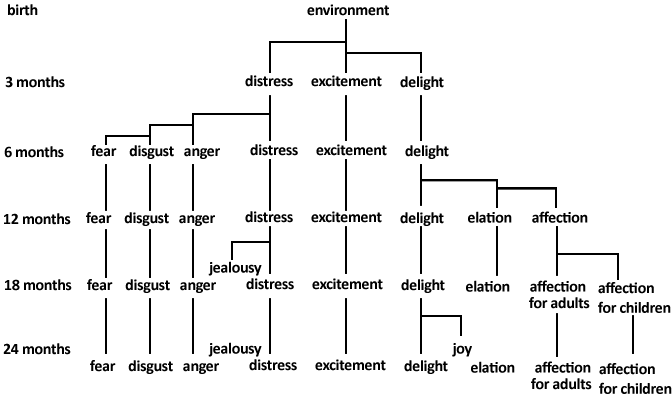 Emotional and Social Development: The adolescent needs more strongly than before to feel he is showing maturity of judgment. He needs this because his judgment is often poor and he soon suffers “negative feedback” as a result. It is as though the parent must lie in wait for some instance of good judgment and then subtly render praise. Parents must learn to understand that the adolescent can shift from good to poor judgment readily; he wavers in mood and opinions. It is important to observe the trend of thinking and expression. It is very easy to hurt the adolescent’s ego (“You’ll change your mind,” “You’ll grow out of it”).
How much responsibility should teenagers be given? General speaking, they should assume more and more responsibility as they demonstrate their ability to handle it. Privileges should be learned, not taken for granted. There are wide individual differences in, the handling of responsibility. The teen years show a constant vacillation between childish and adult behavior; the seventeen-year-old may be excellent in running the farm tractor and protecting expensive equipment, but will then burn tries with jack-rabbit starts in the family car. When responsibility is shown in one endeavor, frequently the parent can help transfer this to another.
The adolescent is something of a rebel despite the best of guidance; but if parents can discover just what it is that he (or she) is rebelling against, the situation can become less frightening. Rebellion is one way of expressing individuality – through the shock technique. Teen-agers are the original starry-eyed idealists; they see events as one or the other, on or on, in black and white with few gray shadings. Teen-agers actually seem to want things to be out of proportion. If several alternatives can be pointed out to the adolescent without loss of his self-esteem, he gradually “learns to learn” that problem solving includes a search for more than just one choice. Adolescents are shocked by disillusionment, particularly that which they find in the adult world. One reason is that they see our faults, the things we accept as part of the system. Inquiring of his father about the definition of honestly, one teen-ager came out with this statement: “You got after my young sister for stealing pencils at school, telling her it was not the worth of the pencils that was so important but the act of taking what does not belong to you. You further explained that it was easy enough to bring her pencils: you could just pick them up at the officer!”
The problem of conformity among teenagers is not so serious as it may appear in a middle-class culture. With their bodies, emotions, and environments all suddenly changing, conformity provides an anchor of security. There is little use in trying to fight to fight teen-age conformity; after all, much of it is learned from conforming adults. A comforting thought for parents lies in the students made of influence. One study revealed that in the areas of clothing, grooming, and group activities, friends won out; in the areas of personal advice, political and religious affiliation, financial matters, and feelings of prejudice (or lack of them), the parents exercised more influence (48).
Theories of Emotions